The power of the true Christian 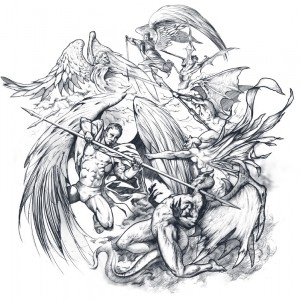 As a Christian you have you power to bind evil. In this new age of ours, much of what is found in the Holy Bible is not as pronounced in our modern churches as they were say ,one hundred years ago. The idea of casting out demons and binding the works of evil through personal engagement with the enemy just isn't spoken of that much anymore is it? Perhaps the answer to this question is the also the answer to the falling of church memberships and the lack of victory in the personal lives of those attending church.  Just maybe this is the reason our young folks are running after every thought of imagination instead of running after Christ. They are taught facts about history of the church and of Bible past. They are taught that Jesus died for their sins and that we are to strive to live a life mirroring that of Christ, but have we also showed them the true spiritual power that that inhabits a solid Christian?

The spirit of witchcraft, drunkenness, perversion, greed and division sadly runs thru our cities like polluted water, offering people what seems to be a quenching of thirst, but thru time only poisons the mind, and leads them to a spiritual and often physical death.  Have we the Church proclaimed the power that Christ himself declared he gave to all that would choose to follow him?  Or have many of our bodies simply taught a portion of what lies within the text of the scriptures due to fear of ridicule or persecution from their local friends. Ask yourself this question: do you still believe the miracles in the Bible and of Jesus? Do you still believe that Jesus said ""Most assuredly, I say to you, he who believes in me, the works that I do he will do also; and greater works than these he will do", (John 14; 12-NKJV) How about in Luke 10; 19 where it reads "have given you authority to trample on snakes and scorpions and to overcome all the power of the enemy; nothing will harm you". (NIV)

In Mark 16; 17(NIV) it reads "and these signs will accompany those who believe: In my name they will drive out demons; they will speak in new tongues". Do you believe in the reality of demons? Jesus Christ did. Note these are not arrogant boastings of pride but as only a few scriptures read, nevertheless true, if we still believe in the whole Bible that is. If Christ gave us such authority why does it seem the battle is being lost in our own towns? Note also I do understand prophecy and the fallen away of Christians from their faith, but as long as there is breath in our Christian bodies why do we give one inch to the enemy of God? Often Satan wins not by victory in war but of solely to passive of behavior? We also know that Jesus said "And from the days of John the Baptist until now the kingdom of heaven suffereth violence, and the violent take it by force".

Jesus Christ as we all know was not a passive person; he was radical in his ministry. In Mark 11;15-17( AKJV) And they come to Jerusalem: and Jesus went into the temple, and began to cast out them that sold and bought in the temple, and overthrew the tables of the moneychangers, and the seats of them that sold doves; and would not suffer that any man should carry any vessel through the temple. And he taught, saying unto them, is it not written, my house shall be called of all nations the house of prayer? But ye have made it a den of thieves. Leaders each one of us know what is soon to come. Let us not be afraid of standing as Moses did in front of the pharaoh and his sorcerers. Let us boldly stand as Elijah did in his fight with the prophets of Baal. Begin to teach your flock to how to defend themselves against the enemy of God. Show them the true power of a Christian.

Visit the main site at: The Arising Voice

Comment by MostlyBruce Eilenberger on May 20, 2011 at 8:48am
We Chrisians have been cowardly. What will we do and say now that one of our friends has been thrown into the perverbial 'lion's den'?  Is this the reason our country isn't mentioned in the Book of Revelation? I hope we stand not just for Israel but for good. Evil has been allowed to take us over and lull us to sleep. The watchmen have also been sleeping. We must stand for Good because we have allowed the boundaries between Good and evil to be clouded....for sure.

AMEN!  Whatever it takes, He will awken His sleeping church. Search us, O God, and see if there be any wicked way. Purge us and make us clean. In Jesus' Name...